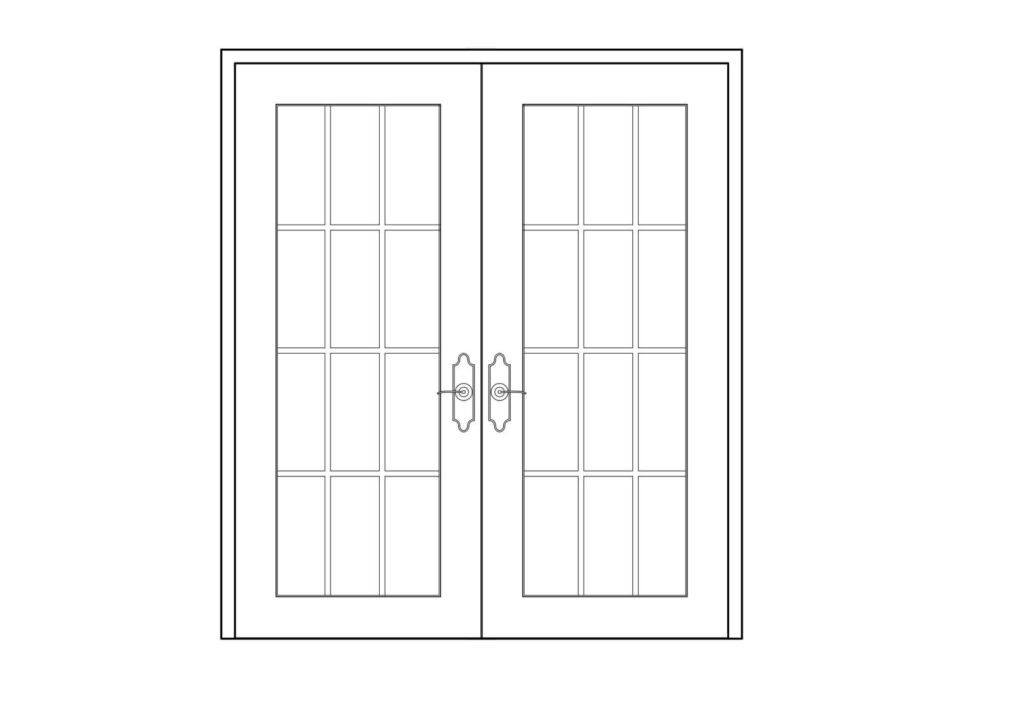 French doors provide a beautifully elegant entry into a room or into your garden. They have been used in Europe for hundreds of years, and a period home really looks wonderful with these doors.

However, if your home has had these doors for hundreds of years already, they may be looking a bit worse for wear now. So, if you’re looking to replace your French door, you may be wondering if there is a suitable replacement.

Today, we’re looking at french and patio doors. To find out if there is a suitable, slightly more modern replacement or whether there is a way of repairing your current doors to retain the style, but ensure they are in great condition. Firstly, though, let’s find out what French doors actually are, shall we?

The door design from the 17th century

These doors originated in France (you probably guessed that) in the 17th century (French Baroque architecture). This was the Renaissance period in France, and new technologies in glassmaking allowed new ideas for doors and windows to come to the forefront and change the architecture in France (and later the rest of Europe) for years.

French doors are traditionally used as an external doors, usually to a patio or garden area. However, some homes use them to separate internal spaces while retaining good natural lighting throughout the home. This is because this type of door has windows from top to bottom, in the sash window style (also popularised and perfected in Europe in the same period).

This is why some people refer to French doors as ‘French windows’ because they look like large windows. There are also examples of sliding French doors, which can either be used to access an internal or external space.

What’s the difference between patio and French doors?

If the description of the French doors above sounds a lot like a description of patio doors to you, we wouldn’t be surprised. This is because, nowadays, we typically use the term’ patio doors’ to describe any door with plenty of windows that open into external space. And ‘French doors’ was the term used before that. So, there isn’t really a difference between French doors and patio doors.

It is simply that one term is the modern-day way of describing these doors and the other is the ‘old fashion’ term.

Of course, for period homes, they are almost always called French doors as they were likely made and installed at a time when this was the correct terminology to use.

The different types of French windows

Internal French doors are used to break up larger spaces in a home while still providing a lot of natural light. As a pair of French doors have panes of glass from top to bottom on both doors, they allow natural light to pass through a home, so they are perfect for adding a dividing ‘wall’ to an area while keeping it light.

External French patio doors are simply any door with loads of windows that open onto a patio or a garden area. Typically, external French doors open outwards, so the view of the area isn’t interrupted by the door frames. Still, occasionally, they are installed so they open inwardly into the home.

Sliding doors can be used internally or externally. The only difference here is that the doors slide rather than open on a hinge. While these types of sliding doors are rarer than the other two, some examples do exist in England, and they can provide a very elegant entryway.

So, now that you know a bit more about these doors, that may help you find some replacement doors. But what if you don’t want modern replacements for your French doors? Well, Chameleon specialises in repairing and restoring doors, windows all other wooden features in a period home.

The issue with modern patio doors is that they can change the character of a listed or period home in a big way. So much so that anyone interested in uPVC or aluminium doors must seek planning permission if they live in a listed home. However, there is a way of repairing and restoring your old wooden doors.

Chameleon can restore wooden doors, same as repair period sash windows back to their former glory. We can remove any rotting wood and replace it with fresh timber that will last decades. We can also draught-proof the doors and hang them correctly to ensure that they work and look wonderful for years. Your doors will look as new as they did when they were first installed in the home. They won’t change the style because the doors haven’t changed, but they will bring your home back to life.

Original French doors and windows are single glazed A big reason for replacing a patio door is because the homeowner wants to have double-glazed doors instead.

However, double glazing is an option in older wooden doors. Chameleon uses Fineo glass for double glazing wooden windows and doors, including French doors. We can install this vacuum glass into the existing frame, so the character is unchanged. Still, this technology takes advantage of vacuum double glazing.

This keeps the double glazing thinner than slimline double glazing, but the two panes of glass actually improve the heat retention and the energy efficiency in your home as much as triple glazing does.

So, there is no need to replace your wooden doors with modern equivalents.

A French door is designed to offer a bright and airy entryway into your home. Many people believe that because of this, French doors are not that secure. However, French doors can have any lock adding to them. You can also use glass break sensors and motion alarms to keep your property secure. Plus, most French doors in the UK are either located inside the home or at the back of the house. So, as long as your garden is secure and your French doors have modern security measures in place, they are very secure.

Are double doors and French doors the same?

For the most part, yes. As we said above, A French door is simply the older name for this style of door. If you have double doors that both open into your garden and they are full of panes of glass, you could arguably call them French doors without too much complaining from anyone.

Do both doors open on French doors?

Yes, they do. Some French doors do have a lock on one of the doors that prevents it from opening when the other is open, but this can be unlocked, and both will open at once. The idea of a French door is to provide as big of an opening as possible to get the best view of the outside space. For most French doors, the opening is 1800mm, but smaller examples are 1200mm when both doors are open.

Are French doors right for your home?

French doors look fantastic in any period home. Whether they create a beautifully open and airy view of your garden, or they are used to divide an internal space, French doors are really hard to beat in style and function. If the French doors in your home are looking a bit down in the dumps and you’re considering replacing them, speak with Chameleon first. We can repair and restore any French doors and provide double glazing in existing door frames too.

We hope this look at the ‘French window’ has helped you understand these doors a bit more. We are big fans of French doors here at Chameleon Decorators and Windows Restoration. They offer loads of style to a period home, as long as they look great. If your timber doors require some repair and redecoration, get in touch with Chameleon today.

We can transform the look of your timber doors back to when they were installed.